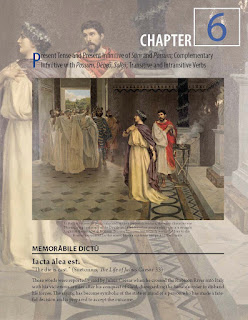 For those completing the worksheet, here is March's image, question, and answer.

Question: Iacta ālea est.
These words, reportedly said by Julius Caesar when he crossed the Rubicon, are documented in Suetonius’s The Life of Julius Caesar. Can you think of any English words that derive from Suetonius’s Latin?


Answer:
Iacta, from the Latin verb meaning "to throw," gives the English language words such as "conjecture," "objective," and "projectile." Alea, meaning "dice" brings us the word "aleatory." Sum, the first person singular form of the Latin verb "to be" provides us with words such as "entity," "omnipresent," and "represent."