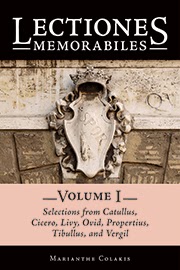 Lectiones Memorabiles: Volume I: Selections from Catullus, Cicero, Livy, Ovid, Propertius, Tibullus, and Vergil, now at press, is due out in June. This reader contains the prescribed passages for the Vergil, Women, and Love Poetry portions of the IB Latin syllabus with examinations in 2016, 2017, and 2018. Order today!

Volume II, which contains the prescribed Good Living and History passages, will go to press in a couple weeks and is due out later in June. When Volume II is available, you can save by purchasing both volumes as a bundled product.

Marianthe Colakis, author of Volume I, recently discussed her experiences writing the commentary with eLitterae newsletter editor Don Sprague. The following interview was originally published in the March 2015 issue.

DES: Bolchazy-Carducci chose to divide the IB Latin curriculum for exams in 2016, 2017, and 2018 into two volumes. What inspired you to choose the volume with selections from Vergil and selections on love poetry and on women?

MC: I had taught AP Vergil for years, so I felt as though I knew the text of the Aeneid very well and understood the issues that make the epic more complex than it would appear to be at first glance. As for love poetry, I was fortunate enough as an undergraduate to learn from one of the great experts of Roman poetry: Steele Commager. He was truly brilliant in that he always made you believe that you were seeing the Latin as the Romans saw it. We translated, but the focus was on the arrangement of the Latin words. I also was pursuing higher education in Classics at the same time that women's issues were coming to the forefront as a field of scholarship. I've followed the field with interest since then.

DES: Authoring the background and contextual essays along with the notes for the volume was a significant undertaking. What in your schooling and experience did you find especially prepared you for doing so? 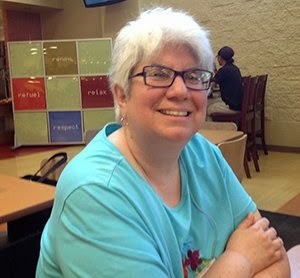 MC: An undergraduate and graduate education in the humanities, including Classics, is excellent preparation for all types of research work and scholarly writing. I'm fortunate in that I like to research. I love working in libraries. The New York Public Library and Butler University Library at Columbia University are superb resources. At the same time, the amount of material available online has grown so much more extensive and dependable that I was able to work away from libraries also. I'm old-fashioned enough to think of brick-and-mortar libraries as my go-to resource, though.

DES: Besides the time crunch, what was the most challenging aspect of this task?

MC: I had not read many of those passages for years, and a few—such as Lygdamus—I had not read at all. I had forgotten how complex some of those authors, such as Propertius, were. I had a new appreciation for what students find difficult when reading the authors for the first time.

DES: What part of the project did you most enjoy?

DES: Which of the authors for this text— Catullus, Cicero, Livy, Ovid, Propertius, Tibullus, and Vergil—is your favorite? Why?

MC: I've always been fond of Ovid. He was younger than the other "Golden Age" poets—Vergil, Horace, Propertius, Tibullus—so it was more of a challenge for him to write something fresh, especially in the well-worn field of elegiac love poetry. He did so much more than rehash old tropes, though! It was interesting to read his take on the Odyssey from Penelope's point of view. All her worries—that her husband is dead, that he's found someone else, that they've grown into different people while he was away—ring very true.

DES: What advice do you give someone beginning their career as a high school Latin teacher?

MC: Take as many opportunities as you can to learn from other Latin teachers! If you're the only one at your school, find a way to connect with others online. Go to meetings and workshops, especially ACL institutes. You'll get more ideas than you can use in a year.

Marianthe Colakis has taught at Trinity College (Hartford), Queens College, Brooklyn College, and Davidson College. She is currently teaching at Townsend Harris High School in Queens, New York. Colakis holds a PhD in classics from Yale University. Much of her scholarly work has involved modern adaptations of classical myths and tragedies; her first book was The Classics in the American Theater of the 1960's and Early 1970's (University Press of America, 1993). In recent years, she has turned her efforts toward development of pedagogical materials. Colakis is author (with Gaylan DuBose) of Excelability in Advanced Latin: A Workbook for Students (Bolchazy-Carducci Publishers, 2003) and coauthor with Mary Joan Masello of Classical Mythology and More: A Reader Workbook (Bolchazy-Carducci Publishers, 2007).

This work has been developed independently from and is not endorsed by the International Baccalaureate (IB).
Posted by Unknown at 9:59 AM