Latin, Greek, and an American Pastime 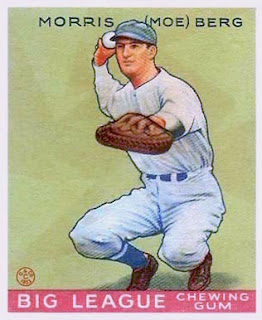 Moe Berg: Catcher, Linguist, Spy
Imagine the quintessential baseball game: it’s a warm, languorous summer day, the scent of freshly mowed grass wafts in the breeze, vendors are hawking hot dogs and roasted peanuts, and then you hear it . . . someone calling out in what at first seems an unfamiliar tongue. Listening more closely, you wonder—could that possibly be ancient Greek?!

If you were attending a Chicago White Sox game in the 1930s, experiencing this scene was a real possibility. As the story goes, whenever Hall of Fame White Sox pitcher Ted Lyons teamed up with catcher Moe Berg, the two relied on communicating in ancient Greek when an opposing runner was on second base. Berg’s own words from his essay “Pitchers and Catchers” (in which he also describes the catcher as the “Cerberus of baseball”) reveal why he and Lyons resorted to this rather unusual practice:

The catcher gives the signals only because he is in a better position than the pitcher to hide them. In a squatting position, the catcher hides the simple finger, fist, or finger-wiggle signs between his legs, complicating them somewhat with different combinations only when a runner on second base in direct line of vision with the signals may look in, perhaps solve them, and flash back another signal to the hitter.

In ancient Greek, Lyons and Berg found an ingenious way to signal each other secretly.

Berg had a history of using ancient languages in the context of baseball. As an undergraduate at Princeton University, he studied Latin, Greek, French, Spanish, Italian, German, and Sanskrit and later attended the Sorbonne in Paris to study experimental phonetics. While playing on Princeton’s baseball team, Berg (playing shortstop) and second baseman Crossan Cooper used Latin as their own “secret language” to communicate who would “cover the bag” in the presence of an opposing base runner.

An abiding interest in the ancient Greeks and Romans—as well as cultures and languages from the world over—revealed itself in various aspects of Berg’s life both on and off the baseball field. Sports Illustrated quotes an anonymous teammate as saying, “We'd all sit around and listen to him discuss the Greeks, Romans, Japanese, anything. Hell, we didn't know what he was talking about, but it sure sounded good.” Toward the end of his baseball career, Berg made several appearances on the popular radio quiz show Information Please, successfully answering an array of questions on Latin and Greek etymology, among other topics. Later, during World War II, Berg’s linguistic skills and extensive knowledge of international affairs aided him in his spying efforts for the United States. He played an important role in atomic counterintelligence, relaying information about the development of Germany’s nuclear program.

A. Bartlett Giamatti: Scholar, Leader, Commissioner
The history of the relationship between classical languages and baseball does not stop with Moe Berg. Perhaps the most famous Latin enthusiast in baseball was A. Bartlett Giamatti, seventh commissioner of Major League Baseball. Formerly a professor of Renaissance literature, and then the president of Yale University, Giamatti eloquently expressed the continued relevance of Latin in a letter responding to the query of a junior high school student:

Ask not, noble Dunn, what prompts us to study a “dead language,” for the language is not dead. We study Latin because without it we cannot know our history and our heritage. And without that knowledge, we cannot know ourselves. Nosce teipsum, brave Dunn. If one can read that, one can—in one's life—begin to do that. The link between Latin and our lives is deep, and abiding.


Giamatti wrote several articles affirming his deep love of baseball prior to becoming baseball commissioner. His praise for baseball linked the sport together with his scholarly interests, particularly his celebration of the color green. For Giamatti, the green of the baseball diamond was “the color of hope,” symbolism that he noted is particularly meaningful in Dante’s Divine Comedy. He also commented on the significance of the word park, derived from the Persian word for paradise, further observing that the first “true” baseball game was played in Hoboken, New Jersey, at a place popularly called the Elysian Fields. It’s almost as if the perfection of the baseball park can only be properly expressed in the language of epic.

Try It Yourself
Are you a fan who’d like to try calling a few baseball plays in Latin? Check out some Latin baseball vocabulary, courtesy of John Traupman’s Conversational Latin for Oral Proficiency, listed below. If you have any other vocabulary that you typically use to describe baseball—Latin or Greek—please share in the comments!

Posted by Bolchazy-Carducci Publishers at 10:14 AM