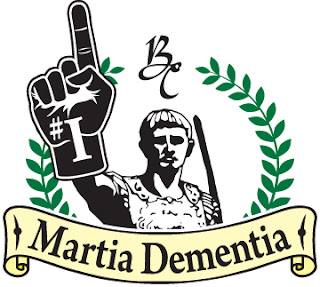 The madness is back! Teachers, students, and everybody else get ready, for in the next month we will launch Bolchazy-Carducci Publishers' Third Annual Martia Dementia contest. The tournament has pitted ancient authors against one another and thrown philosophers and politicians into the mix. This year thirty-two ancient deities, who have sat idly the last two years and watched from Olympus, will descend upon the madness and compete against the mortals. With your help, one of them will rise above the others as champion of the Mediterranean. To the victor belong the spoils, and to whomever finishes with the best bracket, spoils await. Before getting to the prizes, here is the way the competition will work. You can participate in this event in two ways.

The Bracket
First is the bracket, then the survey. You will need to download a bracket from below, when it's made available on March 6, and save it as a PDF file. Having done this, simply advance the authors of your choosing through the bracket, writing in your picks and eliminating the others, until one remains above the rest. Send the completed bracket to the email provided on the bracket. The rankings are random. There is no rater’s index or previous statistics to consider, and no author has an advantage over another. The only factor determining an author’s advancement is your participation. Filling out the bracket to be eligible for the prizes is the minimum requirement.

The Survey
The second way to participate is the survey. To further improve your chances of winning, a survey will be available for each round (below) where you can vote for your picks or, as it gets closer to the championship, vote against any picks that might hurt your chances of winning. This aspect is separate from the bracket and not necessarily required, but actively participating in the survey betters your chances at winning. We will determine the victors of each match by who has the most survey votes by the time the survey closes.

We cannot stress enough the importance of voting early and voting often. So when the survey goes live, cast your votes! Get your friends to vote for your picks. Teachers, get your students to stuff the survey with favorable votes!

Be sure to bookmark this post, as we will post the survey links for each round as they become available here.

Victori Spolia
The competition is not solely for bringing posthumous glory to your favorite ancient figure. Bolchazy-Carducci Publishers is offering book prizes for the brackets that most closely resemble the final results; a $100 book credit will be awarded to the first-place participant, a $50 credit to the second-place participant, and a $25 credit to the person finishing in third place. Feeling like you no longer stand a chance? Do not give up! There will also be a $25 credit for having the most abysmal bracket! So get ready, and stay tuned. Brackets will be available Tuesday, March 7, and the voting madness begins Thursday, March 16!
-Connor Hart


Bracket
Round of 64
Round of 32
Sweet Sixteen
Elite Eight
Final Four
Championship Round
Posted by Unknown at 9:14 AM