For those completing the worksheet, here is December's image, question, and answer. 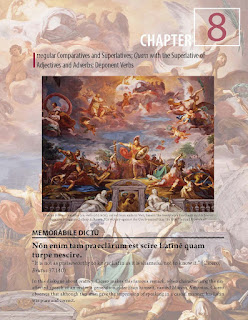 Question:
Nōn enim tam praeclārum est scīre Latīnē quam turpe nescīre. Cicero makes this famous remark in Brutus, his dialogue about oratory. Can you think of any English derivatives in this Ciceronian line?

Answer:
The adverb nōn provides English with words such as "nonchalent" or "nonsense."  Praeclārum helps bring words such as "clarify" and "clear" to the English language. Est, the third person, present, active, singular form of the verb esse, meaning "to be," has given English words such as "interest" and "present." The verbs scīre and nescīre both yield words such as "science" and "omniscient." Latīnē, from Latīnus, is the word from which all things "Latin" derive! The adjective turpe, from turipis, has brought words such as "turpitude."

Think your students know the answer to the January question on the worksheet? Tweet @BCPublishers the answer by January 25th for a chance to win five of our new buttons. We'll announce our answers, as well as the winner, at the beginning of February. Submit an answer for your class, or better yet, encourage students to participate individually.
Posted by Unknown at 2:57 PM