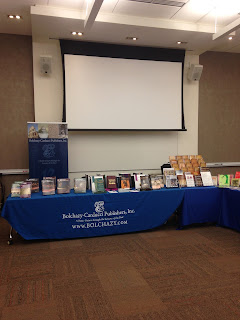 The Illinois Classical Conference met October 7–9 at Stevenson High School in Lincolnshire, IL.  Assistant editor Laurel Draper represented Bolchazy-Carducci over the weekend. Chris Mural, the Latin teacher at Stevenson, was the local host and the organizer of the book exhibit. The ICC used book exchange, which raises money for scholarships, was also in the book exhibit.

One of the highlights of the weekend was Saturday’s luncheon. The luncheon was co-hosted with the Chicago Classical Club and featured a talk from Daniel Garrison (Northwestern University) on Latin as a modern language. Peter Burian (Duke University) gave the keynote address, titled “The Stronger Sex: Athenian Democracy and the Case of Lysistrata.” Matthew Sparapani, last year’s Teacher of the Year, spoke on the importance of community within the Latin classroom and within the classics profession.

Another highlight from the weekend was the awards ceremony. Chris Mural received the Teacher of the Year award. Marilyn Brusherd, a longtime member of ICC, the organizer of the book exchange, and a perennial volunteer at classics events for high school students, received the Lifetime Achievement Award.

Overall we had a great time talking with friends, customers, and all attendees. Were you unable to make the conference and still have questions? Did you attend and would you like to share a part of your experience? Feel free to comment or ask questions below. I'd love to hear from you!