If you have not already done so, check the inside back cover of our 2015-16 Roman Calendar for a reproducible worksheet that asks students to engage with the mythology-oriented artwork included in the calendar.

For those completing the worksheet, here is July’s image, question, and answer. 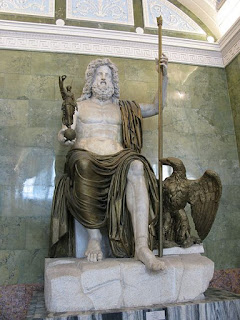 Question: Four of the elements in this sculpture—the statue in Jupiter’s right hand, the scepter in his left, the eagle, and his clothing—were added in the 19th century. Why do you think each was added? Who is the statue in his right hand?

Answer: The eagle is a symbol of Jupiter, often associated with him in mythology and art. The scepter signifies Jupiter’s status as king of the gods. The statue is Victoria (in Greek Nike), goddess of victory. In Greek mythology, Nike was Zeus’s charioteer when he fought for control of Mt. Olympus; she was often associated with him. Jupiter is often depicted wearing clothing such as that seen in this sculpture—though the restorers who added it may also have been concerned about modesty.

Think your students know the answer to the August question on the worksheet? Tweet @BCPublishers the answer by August 25th for a chance to win five of our new buttons. We'll announce our answers, as well as the winner, at the beginning of September. Submit an answer for your class, or better yet, encourage students to participate individually.

To add your name to our mailing list for the Roman Calendar, email orders@bolchazy.com with the subject line "Roman Calendar"; be sure to include your name and mailing address in the body of the mail. Calendars are mailed annually in August.
Posted by Unknown at 2:22 PM